skip to main | skip to sidebar

It has been so long since I havedone any posting here or any stamping or sewing I am surprised I finally got back to doing anything. For the past month I have been both traveling and working on some health issues that have kept me feeling pretty blue. Its time to get out of my funk and back to living. For the moment I have gone back to my first love, quilting.

I have been part of an online quilting group with Carol Doak the "Queen of Paper Piecing" for several years, but have not been active with them for at least two years. That's where I went to begin again. Carol was in the process of offering a mystery quilt project and though I was several weeks behind I decided to jump in.

Now you might ask what is a mystery quilt??? Well it's a quilt you make that is just what its name says....a mystery. There are clues (construction steps) given along the way. The first clue pertains to the fabric you need and the amount of each one. It is stated simply as things like 1 yard of dark for background, 1/2 yard multicolor small print, 1 yard light cool fabric etc...... You don't know what pattern you will be using just what the colors and values will be. Here is what I choose from the Step one instructions. (Note: the second fabric from the left didn't phoograph well it is actally a medium range rosey pink) Also givien qith step 1 was a cutting chart so you can cut our fabrics and have everything ready to sew as the other steps are revealed. 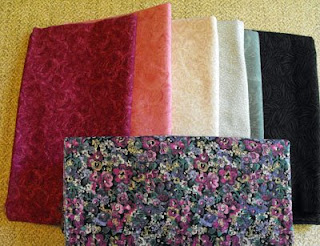 Step two was intructions for 16--4 inch blocks. Since this mystery is authord by Carol Doak it is a paper piecing project. So for this step there was a paper piecing pattern which is numbered in the order that you sew the fabrics on. I was instructed to make 8 each of two different color placements for this block. Here is the beginnings of my mystery. Things begin to get really intersting at this point. 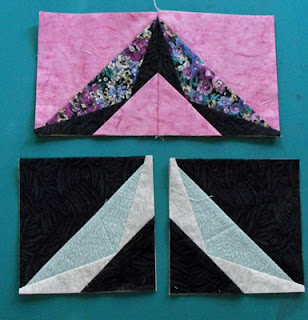 Since I was a late comer to this mystery I actually already had printed out step 3 and was ready to go as soon as I finished step 2. Step 3 used the same block as step 2 in a different color pattern. We were to make 16 blocks and then sew them together into 4 sets of 4 blocks. Here that step is completed. 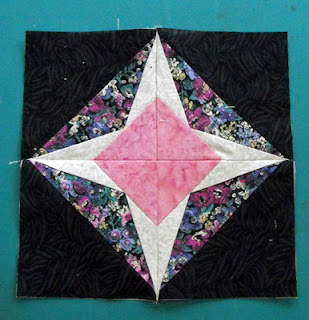 So now I have 8 single 4 inch blocks, 4 units of two blocks sewn side by side and 4 units of four blocks. I however still have no idea how the quilt will look when all is done. The mystery is still safe!
at 2:36 PM No comments:

Suzanne
I am an avid crafter and quilter. I have been quilting in various forms since 1987. Stamping is a much newer endeavor. 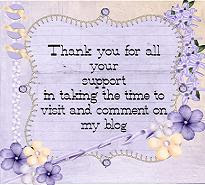